I had heard that the City was doing some fire suppression work in Ridge Park in Coquitlam's Westwood Plateau area, and went for a look. WOW, I knew some of the problem areas already, but was surprised at seeing that the actual ridge area was also under their destructive ways . No idea why the ridge itself needed work done on it, no homes, and fires in the past have always been stopped by the rocky nature of the ridge area with its thin mineral soils; make work project I guess. I guess that Ridge  Park will never be allowed to just be itself and slowly heal from all the past human-induced damages again, a slow festering open wound seems to be the prescription that the Parks department has chosen to take. Sad for all users of the parks, and especially the wildlife that struggles to live there, they will have to work much harder now to survive.
See the extent of the prescribed forest prescription HERE and HERE (pdf)
I saw a young Douglas Squirrell that was obviously distressed by all the activity nearby, acting very erraticly

Some pictures near the High Knoll, no homes near here at all: 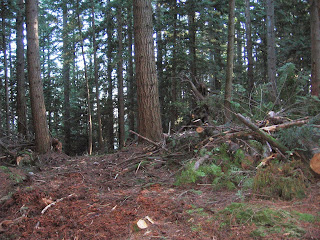 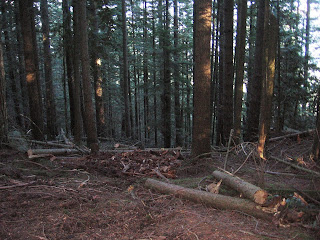 Between High Knoll and Low Knoll 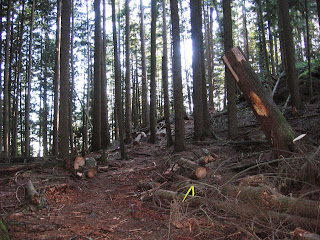 Trail to Low Knoll viewpoint is now a road, (just a matter of time now before someone falls from the cliffs)

Links to some pictures:  Picture near the viewpoint (Low Knoll) more of a fire hazard now than before, when they were standing upright; go figure !

This next area burnt in the 1970's and was aerial planted, and is filled today with young trees mostly under 10 metres tall, and filled with "ladder-fuels",(the branches still remaining on the young trees, which can be a problem when and IF a fire occurs, by allowing the fire to reach the tree tops easily and travel faster.)  It was always totally beyond me why the City allowed homes to be built in this area without a decent firebreak between the forest and the homes, ( there is NONE, wooden fences too, courting disaster )

Boundary near creek clearly visible in this Image
Clearing near the power lines .   Below the area away from homes they appear to just be cutting the trees and leaving them in place, without chipping them. Nearer to homes they appear to be chipping the trees where access is easy, leaving fairly deep piles of wood chips in a few places, that will take forever to break down. 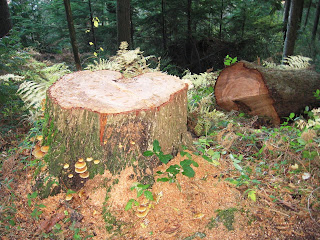 Further down it appears that Wildlife trees are also being cut down, ouch !