A good turnout considering the variable weather we have been having.  Still the auction generated nearly $2,000 for a good cause.
The bake table bringing in a record amount, plus the books, Wilderness Committee calendars, and Norma & Don's greenery, our final total should be up around $2000.  Well done, everybody!!
Most if not all of these funds going to the Oiled Wildlife Society of B.C. 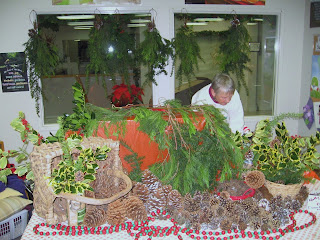 Norma G., was selling holly, evergreens, cones, made somewhere near $100 for the wildlife.

Some of the participants, members 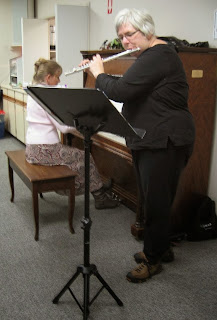 Music too! deck the halls with balls of holly, fala,fala,la,,,,

Followed the next day by the huge loss to the community of the venerable Mossom Creek Hatchery, started by BMN members, Ruth Foster and Rod MacVicar  back in 1976.

Community support to rebuild, is probably larger than even the Society thinks it is.

It will rise from the ashes like a Phoenix, and be better than ever. The loss of the library, and especially the memorabilia is particularly devastating though. Hopefully enough of the history remains in the community, so that the community can help rebuild the memories.

An account has been set up with TD Canada Trust for donations. Contribute at any branch of the bank into account 539-5000965. Businesses can be issued tax receipts. A fundraiser is expected to be announced in the new year.
People with photos, newspaper clippings or any other material related to the hatchery are asked to email the images to elaineawillis@gmail.com

Mossom Creek is named after this fellow: Mossom Martin Boyd, a lumberman from Bobcaygeon, Ontario who owned a portion of the property that Mossom Creek runs through, and who also  held numerous land holdings in B.C.; Port Moody... especially the Lake Cowichan area on Vancouver Island, where extensive logging operations were carried on.
Posted by niftyniall at 3:03 PM