So what in the world is a capercailzie you say? read on:

Famous game bird, imported 12 years ago from Scotland, reported not to be extinct here, as supposed.

Sportsmen and naturalists alike will be interested in the statement
Mr. Arthur Robert Sherwood, (1862-1945) president of the Natural History Society of Victoria, [ VNHS ] that capercailzie were seen In the neighborhood of Pitt Meadows, Vancouver during the past Summer.

Mr. Sherwood and Mr. Alfred Edward Crickmay,(1875-1954) of Vancouver, were present at the releasing of capercailzie at Pitt Meadows in 1907. From that time up to the present there has been little reference to the imported birds, which seemed to have disappeared. Mr. Crickmay however, asserted that he had seen one of these big game birds in the vicinity during the Summer of this year, and as the capercailzie is very much larger than any other species of grouse, there is little reason to suppose that he was mistaken.

As a game-bird it was at one time practically extinct In Scotland, but was re-Introduced and is still to be found in other parts of Northern Europe, and its survival over a period of twelve years In British Columbia would indicate, that the conditions here are suitable, provided it is given sufficient protection.


Some facts regarding birds of Province.

There has been during this last Summer and Fall a very unusual number of blue jays in the vicinity of towns, and even on the streets. Several reasons are advanced for this, one being that these birds, being accustomed to living in the thickets and forests, have been driven out by forest fires, and another being that there is a peculiar lack of fir cones on which they feed.
The latter reason appears to hold in the vicinity of Sproat [ Sproat Lake ], where the jays left the woods to feed in the gardens on small fruit and insects. It was noted that the squirrels did the same, for apparently the same reason.
Blue jays do not migrate, so that they would not be there merely on their way south. This curious appearance in towns is being taken up and correspondence entered into with residents in different parts of the Province.

These are reported to be becoming more plentiful on the Island, and flocks of them can be seen flying about farms and other cultivated areas and feeding in the plowed fields. They have come over from the Mainland, where they are very common, having come there from the Prairies and the East, following the cultivation and transportation of wheat. The name of the blackbird here is Euphagus cyanocephalus, and the male is noticeable for the beautiful blue purple sheen of its feathers and the eye which is almost white.
Crows are, as usual, very numerous.
The California quail has taken very kindly to the country, especially amongst the broom in the vicinity of Victoria. It gets both food and shelter from the broom, and may be seen running about almost anywhere in the city parks and empty lots.

The English songbirds which were introduced by the society in 1912 do not seem to have thrived, except as regards the skylarks which are to be heard quite often in the northeastern parts of the city, near the Normal School. Other birds have been reported at long intervals, but hardly any really authentic information has been forthcoming. The fact that the birds had such a miserable long passage from England must account for their not having been a success.

Much interest was taken in a report that a Capercailzie had been observed at the head of Pitt Meadows, and a general discussion arose, during which evidence for and against the probabilities of this bird having become acclimatized in the mountains to the north of the meadows.

The question of the effect of change of environs on bird life was discussed and a number of members gave interesting facts about the appearance or disappearance of various birds in the last ten or twenty years. Small birds which formerly lived in the eaves of old houses in Victoria and fed off the streets have gradually moved away to the suburbs on account of the paving of the streets.

The purple martin, which was very common in 1902, and used to build under the old lamp posts, have been driven away by the sparrows, and they in turn have been driven out by the paved streets. Night hawks [ Common nighthawk ] are also leaving for pastures new.

Barn swallows, too, have gone on to the land.   The hardy little English sparrows,[ House Sparrow ] who seem to be able to stand anything, have also left the paved streets, with their coating of oil.

Two instances of the imported being noted are those of the Chinese starling [ White-shouldered Starling, Sturnus sinesis ] and the ringdove. The Chinese starling has thrived wonderfully in the eastern suburbs of Vancouver, and the Lower Mainland, having apparently accidently been brought over from China. A member was surprised one day to find a ringdove [ Eurasian Collared Dove ] in his chicken house. It must have come on a ship to Victoria.

A very interesting letter from Mr. Higgs, of Saturna,[ Saturna Island ], on the subject of a tame puffin which he had, was read, and brought up the subject of tamed wild birds and some interesting facts regarding them. Mrs. McIlroy spoke of losing a pet canary from a cage in Victoria and finding some two years afterwards the same bird clinging to the cage, evidently glad to get back home after two Winters in the open.
First appearance of various flowers and plants were reported. It is hoped that anyone observing the coming of Spring flowers, either in the woods or in outside cultivation, will send word to that effect to some member of the society, as a record book is kept year by year for this purpose.

Excerpt about the Capercaillie:  In 1906, 14 Capercaillie were released near Cowichan Lake  on Vancouver Island, and eight were liberated near Lake Buntzen  on the mainland. Stock was obtained from Denmark and released by Mr. Chaldecott (see note 1) and Mr. Musgrave.

Present status in British Columbia: These introductions failed, and the capercaillie does not occur in British Columbia now. This species is a very large tree-loving grouse, somewhat resembling the blue grouse [ Dusky Grouse ] but much larger. It is native to the pine forests of northern and central Europe and Asia. It was once indigenous to northern Scotland and Ireland, but was exterminated there in the late 1700’s. It was reintroduced in 1837 and still occurs there. 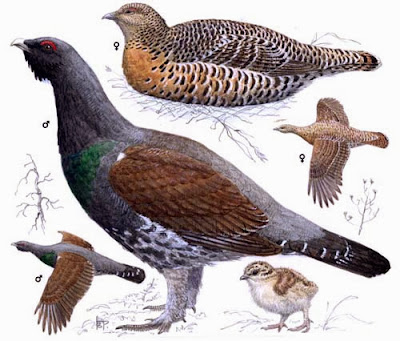 And now for some more recent fun, a Youtube video:  Swedish reporter chased by angry Capercaillie

In the fall of 1903, 100 pairs of skylarks, Aluada arvensis were released near Victoria by the Natural History Society of British Columbia; in 191 an additional 49 birds were liberated in the same areas. Others are said to have been released about the same time on the Lower Mainland at the mouth of the Fraser River (Brooks and Swarth, 1925 ). Prior to this, in 1908 or 1910 a G.H. Wallace is said to have imported a number of skylarks, along with other British birds which included Red breasts, Blue tits, Linnets, and Goldfinches. These were apparently released at various points on the Saanich Peninsula. None but the skylarks survived. I n1919 a Mrs. E.A. Morton is said to have released five imported skylarks at Oak Bay. Present Status in British Columbia: Established in suitable grasslands in the vicinity of Victoria, on the Saanich Peninsula, and sometimes on Sidney Island. Much of the habitat occupied by the skylark was usurped by housing and other projects in the 1960’s with a subsequent population decline....

Francis Millar Chaldecott (1864-1949) was a solicitor, early settler in Point Grey and one of the organizers of the Municipality of South Vancouver.  Member of the  Vancouver Angling and Game Association., active in the community, and apparently liked to release alien animals into the environment. photo: 1929  Van Archives A26622