Members of BMN and friends went on an adventure from Rocky Point to the Indian River estuary which is located at the northern part of  Indian Arm, (known more commonly at one time as the North Arm.)  with many stops and pauses along the way to enjoy the sights and sounds of the area. The trip was organized in aid of generating some monies to rebuild the Mossom Creek hatchery, after the disastrous fire last year.

I have created two albums of photographs one at Flickr and another at Panoramio.

Also Paul Steeves has shared his photo album of the adventure

And Jolene Bonhomme has shared her album with us.

Along the way there are pictographs to be seen, the best known of which are near Best Point, a few poor quality images HERE

But there are many other pictograph sites painted onto the cliffs of the fiord; a short summary below.

DiRr 2. About 750 meters north of Brighton Beach on the western shore of the arm.

DiRr 7. On the western shore of the arm south of Croker Island and about 275 meters south of DiRr 6.

DiRr 8. On the eastern shore of the arm on cliffs to the east of the Vancouver City Powerhouse site.

DiRr 11. At North Sunshine on the western shore of the Arm.

DiRr 12. On the western shore of the Arm, just north of Deep Cove Marina, and a little beyond the Grey Rocks powerline.

DiRr 13. On the western shore of the arm opposite Farrer Cove and approximately at Grey Rocks.

DiRr 14. Approximately 125 feet south of Site DiRr 2 on the western shore of the arm.

There are also numerous pictographs along Pitt Lake, the most well known can be viewed in my Pitt Lake blog
The Pitt Lake pictographs have fared better to the weather, and most of the designs appear to be more recent then the art along indian Arm.


Some of the wildlife and ecology seen during the trip.
BMN member Hillary Maguire has shared her birdlist at EBIRD
And Megan Willie's bird list, also at EBIRD

( Makes me wonder if the birds were counting us, and posting the data on EHUMAN. Certainly appears to be lots of lifeforms utilizing Indian Arm.  )

And collectively throughout the day the list below created:

I thought that it may be interesting to some to see some of the more historic photographs of the fiord. The area has been enjoyed by people since the earliest times of occupation. (Most of these photos have been reduced to 20% or less from the original size, click on the links to enjoy the images in their original sizes.) 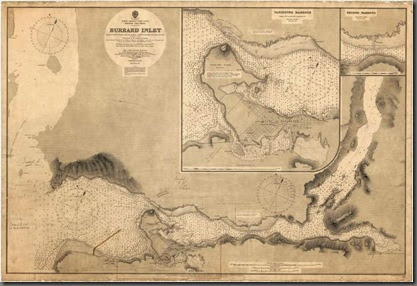 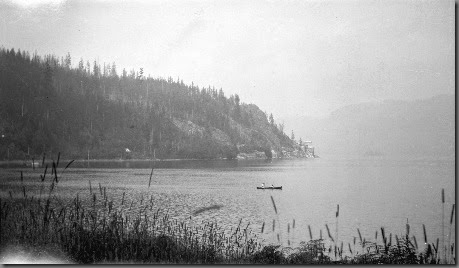 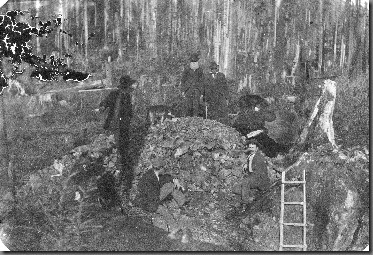 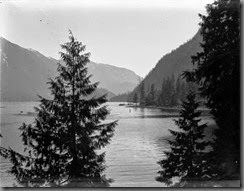 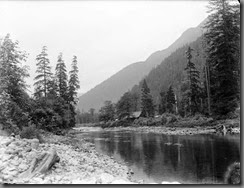 A short but far complete history of the Indian River Park is available HERE as a PDF.
Note: you will frequently notice that Wigwam Creek as it is known today is frequently referred to as Indian River which it is not. 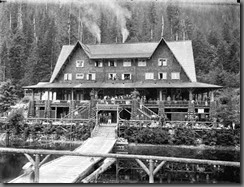 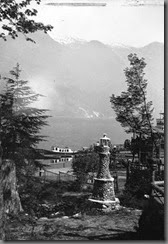 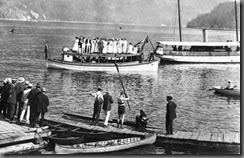 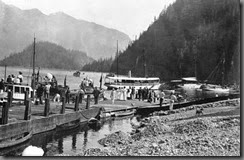 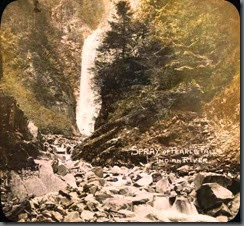 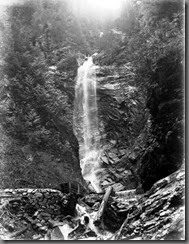 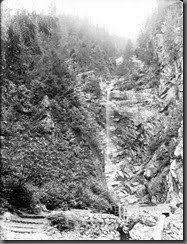 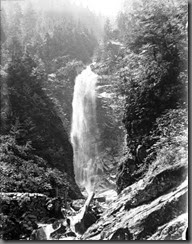 The Spray of Pearls Falls, even has a legend about it created to bring in the tourists, a quick read…
The legend of the falls of the spray of pearls  (PDF). 1916   Author: Jane Parkin
The legend is about two Scottish immigrants, Norman and Pearl McNabb.

At the end of Burrard Inlet, Indian River, Wigwam Inn. 1923. Note: This is located just north of the Wigwam Inn, it is showing part of the trail that connected the Inn with the eastern side of the Indian River.
photo:  Hubert William Lovell.  CVA258-48

This is the largest waterfall in Indian Arm, the immediate area near it was heavily exploited for the local granitic rocks, which were used as building stone, and later as rip-rap primarily in the Lower Mainland area. After the mining was over, a recreational lodge opened up on the site, which did not last very long. (If you want to know more about the quarry, just PM me, I have a fair amount of facts and figures about the mine. ). The Grand Creek watershed has been heavily logged, and the resultant damage is very evident in the hills above, numerous slides abound from the road building efforts involved in getting to the wood. A nice quick read of some of the history of the area near Granite Falls is available HERE as a PDF. Today in 2014 the area is part of Indian Arm Provincial Park. 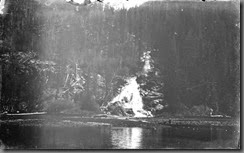 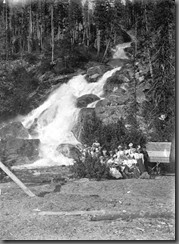 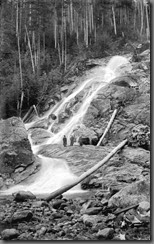 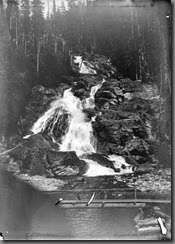 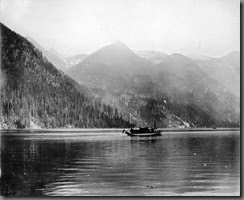 Boating scenery near Vancouver. 191?.
Shows a boat up the North Arm of Burrard Inlet, near Granite Falls.
Note: Granite Falls is barely visible to the right of the bow of the boat in the distance.  A18087 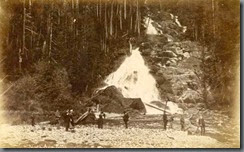 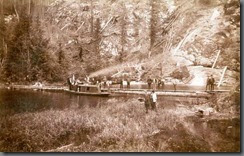 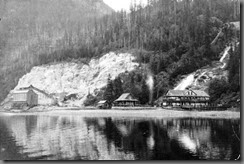 View of Coast Quarries Limited and Granite Falls in the North Arm of Burrard Inlet, ca.1925
A26886 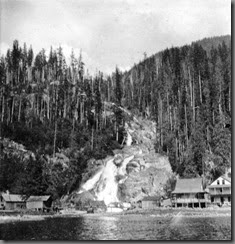 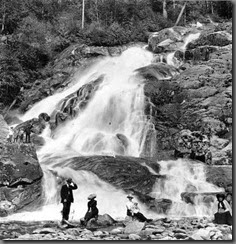 People sitting at the base of Granite Falls at the north end of Indian Arm. 1914-1915.
Photo attributed to Franklin Walter Hewton.   A33036
The Granite Falls quarry, Indian River Quarries  092GSE036 was the longest running quarry in the Indian Arm area. Here is a listing of some of the other quarries:

And finally the mayor of Belcarra, Ralph Drew has been very prolific in gathering and sharing some of the history of the area, have a look HERE for many hours of reading pleasure.
Cheers
Posted by niftyniall at 2:49 AM